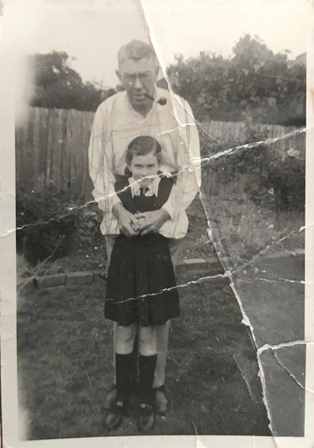 She is shown on the left with her father, Hubert.

This page has been created with the assistance of their son Riq, who also supplied many of the photos.

The family had posted this notice of their engagement in The Sydney Morning Herald on Tue 3 Jul 1951:

On Mon 02 Jul 1951, Moree’s North West Champion reported on Judith’s engagement, describing her as being “in her second years training at The Mater Hospital, Crows Nest,” and “Fernao Henrique (Sonny), de Carvalho B. Ec, elder son of Mr. and Mrs F. H. de Carvalho of Sydney and Tokyo”.

A newspaper article in The Sydney Morning Herald on Tue 6 Nov 1951 carried a photo of Judith with a friend; the caption read: 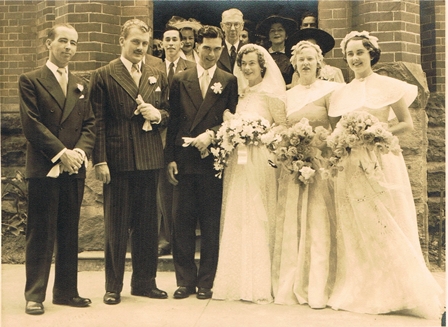 Judy and Sonny’s wedding. Judy’s father Hubert Halsted is standing behind the couple. Sonny’s brother David is standing alongside Hubert, and over Judy’s shoulder is Anne de Carvalho.

“AUSTRALIA is the country where I shall spend the rest of my life,” said Mme. Fernao de Carvalho, formerly of Hongkong, who returned to Australia a fortnight ago, from a world tour.

She brought her family of four children to Australia in 1940, but was not reunited with her husband until the end of the War.

She spent three months in conditions there. Thousands of Chinese from the interior were pouring into the city and squatting wherever they could get a roof over their heads.

From Hongkong, she went to Bangkok, thence to Singapore.

In her opinion, Bangkok is the least damaged of Japanese-occupied cities, and Rangoon, the worst.

In Singapore, the accommodation problem is so serious at the large hotels that at Raffles, people are asked to share rooms with complete strangers.

“Everyone in the East seems glad to see the British back,” said Madame Carvalho.

Madame Carvalho then flew to London, where she stayed for eight weeks. People of England seem bitter that all the goods they see are for export, with very little for home consumption. They are, however, able to refurnish their homes with good quality furniture and draperies, she said.

On a priority system, victims of the “blitz” are able to purchase beautiful hand-blocked furnishing material and utility furniture of a quality seldom seen in some of our “better” productions.

In Paris where she spent three days, she was amazed at the amount of clothes available – at a price – in all the shops. “It seemed that exports were not being made to the detriment of the French women as was the case in England,” said Madame Carvalho.

While staying at Estoril, a sea-side resort in Portugal, she [saw?] Donald Budge and Bobby Riggs, and in the crowd were ex-King Victor Emanuel and the ex-Queen of Italy. She said that in Portugal tennis is a sport only for the “smart” set.

“The night clubs in Portugal are excellent, and the bands compare favorably with America.” she said.

Outstanding impressions of her trip were –

On her way to Portugal, Madame Carvalho spent a day at St. Sebastian in Spain and considers the Spanish women still the smartest in Europe.

Sonny attend St Ignatius’ College, Riverview, gaining a prize in geography (the Catholic Freeman’s Journal, Thu 18 Dec 1941). He enlisted (service number 443998) into the RAAF, however his service record is not yet available online.

I, FERNAO HENRIQUE DE CARVALHO of Portuguese nationality, born at Amov, China, and resident 2 years in Australia, now residing at “Cranford,” Bathurst-rd., Sprlngwood N.S.W., intend to apply for naturalisation under the Nationality Act 1920-1946.

Sonny played first grade cricket for Gordon (The Gosford Times and Wyong District Advocate, Fri 14 Aug 1953) before moving to the Newcastle district; in fact he appears in over a hundred newspaper articles describing games he played in. As his son Riq says: “He was very involved in the Australian Old Collegians Cricket association. He was manager of the second of the AOC World tour in 1960. And toured with the AOC several times; World tour 1960, India 1965, New Zealand 1969, India 1973.  He was personal friends with a great number of the international cricketing legends of the 1950’s-70’s and beyond. A member of Lords. Any international touring side that came to Newcastle would always end up at our place. One memorable occasion had Packer’s first world team & the touring Indian team at the family home in Merewether at the same party. If you can read the players name on the cricket teams 12 photo it a who’s who of Australian cricket at the time. I think it was possibly a Australian vs Newcastle or northern NSW match in the late 50’s or early 60’s. you can see how young Simmo & Ritchie are and Keith Miller looks to be in his prime (Sonny in front lower right).”

Below is a selection of photos of Sonny and his many cricket friends.

[Sonny] was very involved in the Australian Old Collegians Cricket association. He was manager of the second of the AOC World tour in 1960, and toured with the AOC several times: World tour 1960, India 1965, New Zealand 1969, India 1973.  He was personal friends with a great number of the international cricketing legends of the 1950’s-70’s and beyond. A member of Lords. Any international touring side that came to Newcastle would always end up at our place. One memorable occasion had Packer’s first world team & the touring Indian team at the family home in Merewether at the same party. 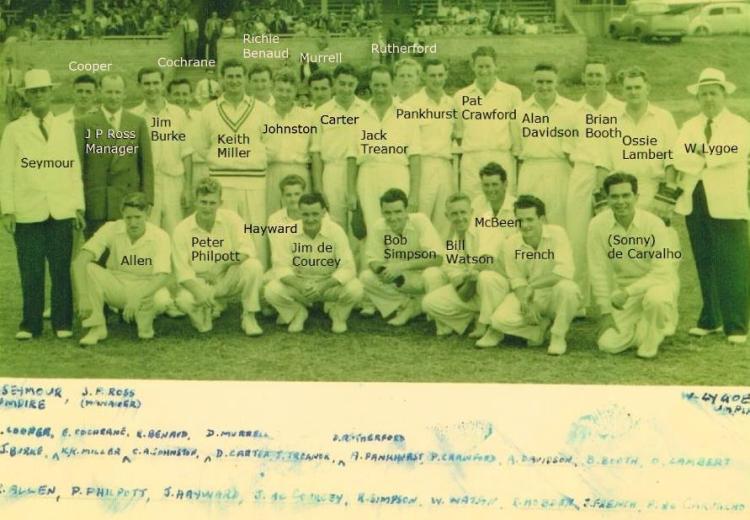 This was more likely a game between the NSW side and Newcastle played between 1954 (the first year Brian Booth was in the team) and 1956 (the last year Keith Miller was in the team): 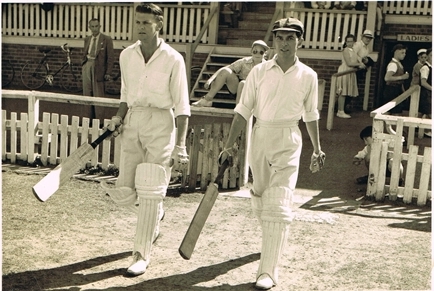 going out to bat 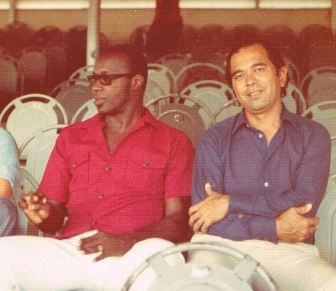 with Wes Hall in Barbados 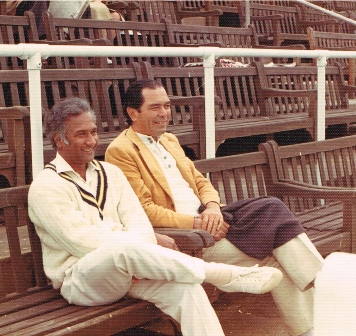 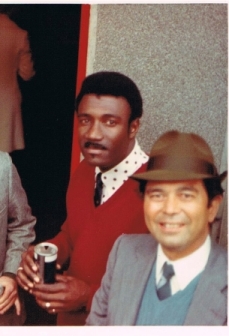 with Clive LLoyd at Lords 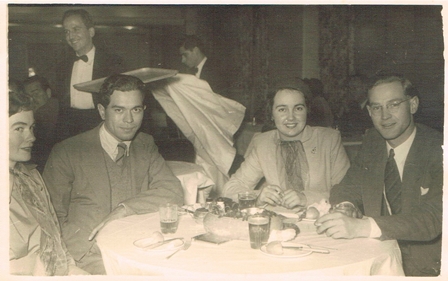 Sonny and Judy at a social in Sydney 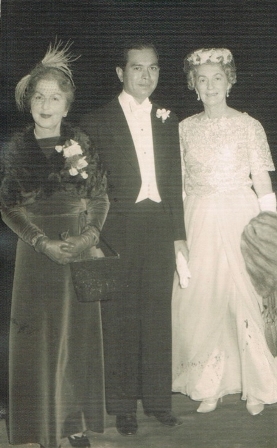 a night at the opera 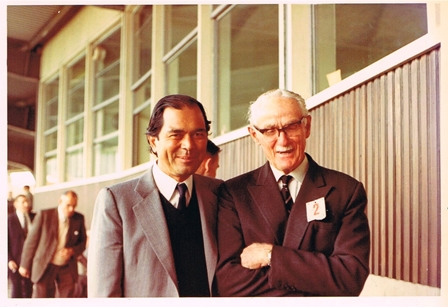 Sonny with Uncle Towns at Lords; and and with Nancy Drew in New York: 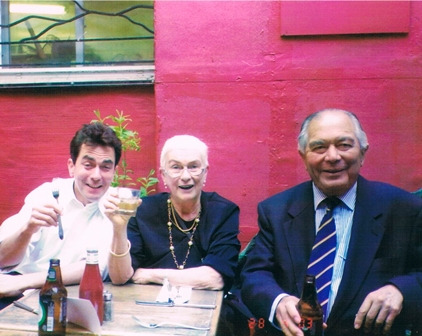 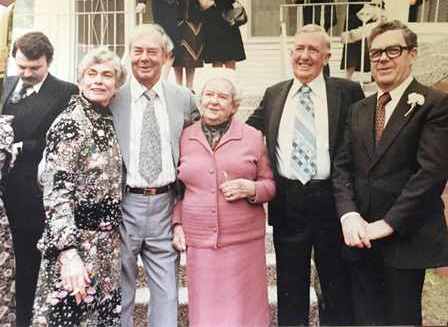 Judy with her three brothers Des, Bill and Howard, with their mother Mossie in the 70’s